All That Glitters Sol Series 1 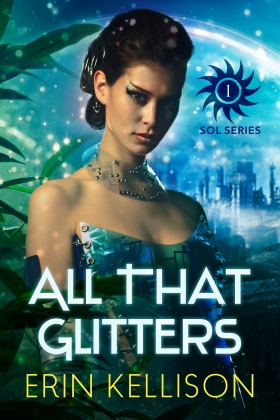 From New York Times bestselling author Erin Kellison, All That Glitters is the first science fiction romance in the exciting and passionate adventures of the Sol sisters.

Cheated out of a fortune by the Sol royal family, lowborn Simon Miner will do anything to get his revenge, no matter how ruthless. When Princess Mica Sol, a terraforming expert, is shot out of the sky on the way to her sister's lavish wedding, she fears the worst—scavengers—and flees into an alien jungle to avoid capture. But the man who pursues and captures her is none other than Simon, her former lover. Passions reignite as violence rocks Sol City, and Simon and Mica must fight for love, family, and their world...or lose everything.

* This novella was originally published in the RONE award-winning Hotter on the Edge anthology, which is no longer available.

Purchase All That Glitters

Excerpt from All That Glitters

A sleek, silver bird glinted over the dense, fog-covered growth of King's Valley. It cleared the blunted peak of the inactive volcano, better known as the Eye, and then flew the easy, canopy-clear route down the stoic Tear, a winter-dry riverbed that cut through the land and only welled to crying during the spring thaw.

"Here," Simon commanded, lifting his ocular to get a closer look at the ship. His breath gasped white in the cold air, but his nerves burned with anticipation. Finally, a reckoning.

The ship appeared to be a dragon flyer—a sleek, luxury spacecraft and therefore overkill for his purposes—but he wasn't about to complain about an even bigger payday. Ten thousand pax, minimum, in addition to the haul for which the flyer would be used.

Jace knelt next to him, a boom cannon propped on his shoulder, ready.

Simon wondered about its occupants. Had to be another wedding guest for the Love Match of the Millennium! now swelling Sol City with corp aristocracy, cluster dignitaries, and celebrities. The excitement was followed everywhere throughout the sector, including Simon's burrow deep inside the mountain mines. The lovers, Pilar Sol and Hakan Frust, heir to the Frust Corp holdings, had been caught during a tryst. At the media's sudden (and convenient) intrusion, buck-naked Hakan protected lovely Pilar's modesty by artfully posing for a ravenous public who wanted a fairy tale, and all the melodrama that went with it. A woman must have come up with the scheme.

Probably Pilar Sol herself. Maybe her viper of a mother. The Sols believed everything revolved around them.

The dragon flyer's passenger was either late for the family functions, or only invited to the public ones. No escort, which suggested the latter. Someone wealthy, but not looked after. Possibly not expected. And too far from the city wall, some 80 km due west, to expect immediate aid from the call for help. At least, not before Simon and his crew got there.

"In one piece, please." Simon swatted at a razor bug lunching on his neck.

"That's not entirely up to me," Jace returned. "The pilot will have to cooperate." But he hunkered into his aim.

Simon stepped away from the mountain's outcropping. A shockwave of boom fire shuddered his bones, the warp of sound rippling through the air toward the dragon flyer. A cold ache in his muscles followed, and loose pebbles and dirt slid down the peaks and onto his hair and shoulders. He pulled hard at the oxy plugged into his nose to keep himself steady.

Jace snorted to clear his plugs, too.

Impact. The dragon listed sharply to the side, nose dropping at an ugly angle, tail flashing its feathers of fire as the engines flamed out.

"Nice," Simon told Jace. On his comm link, he cued Otis, who was on the ground waiting for word. "Flyer coming down on the Tear."

The dragon spun in the air, once, twice, still pointed downward to crashing death. Seconds to pull up. Simon's heart went thud thud, but he gritted his teeth to take it. No going back now. Gods, where were the ship's fail-safes? This close to the ground, landing should have been simple.

"Come on," he urged. He had enough blood on his hands.

"Not my fault," Jace said, standing. He lowered the still-humming weapon to his side.

The dragon finally flattened its earthbound careen, altering its course from the smooth safety of the Tear channel to burn along the treetops for a click. The canopy swallowed the ship without a sound.

Gutsy move. Took nerve for the pilot to chance an alien jungle rather than a safe landing on the Tear, where his net worth would keep him alive. If that flyer brought cash, then its passengers would bring in more. More trouble, too, but Simon could be cheerful about that, as long as at the end of all of this he was far, far away from Sol.

No smoke—a good sign for Simon's purposes. The ship should be intact.

The razor bug was back, with sharp friends. Simon swatted again, but the welts were already rising.

"Looks like we're going into the green instead," O said.

"Looks like," Simon returned. Then added, "Make sure to bring breathers for our guests."

Natives had nose plugs to increase O2 intake, but these off-worlders clearly thought that they could survive on any terraformed planet.