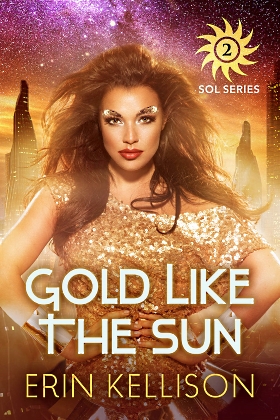 From New York Times bestselling author Erin Kellison, Gold Like the Sun is the second book in the exciting and passionate adventures of the Sol sisters.

It's the wedding of the millennium! Princess Pilar Sol and Hakan Frust are celebrating their union with sector fetes full of celebrity and pomp. Theirs is an arranged marriage to preserve the vital commerce of the Nyer Transit Hub, and yet Pilar is madly, unreservedly, passionately in love. She has all the excitement she has long dreamed of—and a little more than she bargained for when she discovers that Hakan's grasping family wants her dead.

Hakan has done everything in his power to save his inheritance—the bustling but impoverished Hub—including marrying a wealthy princess for her dowry. His heart isn't supposed to be part of the deal, but Pilar has all the beauty and joy his life lacks. When Hakan runs afoul of his uncle's associates—criminal in nature, violent in approach—he refuses to risk Pilar, not for money, not even for his life.

But Pilar is not so easily cast aside, and negotiations turn into a gamble with the future of the sector in the balance. Hakan is about to learn about the high stakes his bride will hazard, as he now has far more to lose—and win—than he ever believed possible: a future brighter than gold.

* This novella was originally published in the Hotter on the Edge 2 anthology, which is no longer available.

Hakan Frust grabbed his cousin Barton by his thick throat and smashed him up against the corridor's wall. "You will not speak of my wife again."

A female staff member in Frust's blue livery looked away as she passed with a hover-cart filled with fragrant white orchids for one of the wedding fetes later that evening. Small consolation that at least within the Frust residence, gossip was less likely to travel around the Hub. Hakan didn't really care if it did; Barton would learn to watch what came out of his mouth. His ever-rising confidence that the marriage would fail had finally gotten on Hakan's nerves. He and his cousin used to bait each other when they were boys, but the subject of Hakan's bride, Pilar Sol, was off limits.

Barton's eyes twitched to the side, and a blue current of electricity ran over his skin, jolting Hakan's palm and arm with hot pain. Subtle body armor—designed to deter physical assaults. Hakan could smell the hair on his arm burning.

His cousin had turned rotten these past few years. Hakan had counted on his help, but this Barton couldn't be trusted with one single chit—especially not after he'd outright stolen funds set aside for the expansion. The Nyer Transit Hub, seat of the Frust family's inter-sector trade empire, regularly exceeded its capacity for human and cargo. Expansion was critical. The cost to cover it had been difficult to acquire. And trusted partners? Apparently impossible.

Fine. Damn him. But fine. Barton was free to live high—he hadn't been born to responsibility. Why should he want to shoulder it now—most of it miserable—just because Hakan needed the help?

But Barton's recent criminal activities—those would stop. And insulting prospective business associates attending the wedding fetes—that would cease, as well. But if his cousin uttered one more foul thing about Pilar, Hakan would personally make him suffer.

Barton lifted a lip to sneer, so Hakan squeezed harder. Hakan could handle pain; he'd submitted to a tolerance program on Enceladus, and was glad he had. He wouldn't give his cousin the satisfaction of a flinch.

"You so much as look in Pilar's direction, and I swear I will rip you apart, bone by bone."

Barton made a choking sound. Close, but Hakan wanted his agreement.

But then, Barton wasn't getting any oxygen, so they were evenly matched. This wasn't their first game of chicken, not nearly. As kids, they'd tasted the Hub's myriad and strange pleasures too early for safety or wisdom. That Barton would stoop this low had killed any brotherly feeling Hakan had left.

Thank gods Pilar hadn't witnessed them for herself.

Hakan shook, but from anger, not electrocution. "Blink once if you understand."

They'd formally married on Sol, her home planet, but now the celebration had come to Nyer, which would be their home. The cheers from the welcome fete rose from outside the residence, where a lush private park, an oasis of Earth flora in the dark of space, now entertained guests from all over the sector. Pilar would be nervous, waiting for him. For all her accoutrements and style, she was not the urban sophisticate she pretended to be. Someone would try to embarrass her—but not Barton, if he wanted to live—and damn if Hakan wouldn't be there to take the burn.

Barton was trying to keep his eyes from blinking at all—idiot!—but impulse brought his lids down in a quick flicker.

Good enough. Hakan released his grip, and the electric-crawling sensation on his skin disappeared. He stepped back.

Barton gargled a bit as he brought his weight to his feet, cocking his head to rid himself of what had to be a mean crick in the neck. He still had that smirk on his face, though. So Hakan took the lightning strike of electric pain and punched his cousin across the jaw.

Barton spun into a head-thumping belly flop. Lights out.

Hakan leaned on the wall to keep himself upright. The bolt of electricity from the strike had left floating gold pinpricks to obscure his vision. A warm trickle from his nose, the tang of iron at the back of his throat, and he had to concede that maybe he'd waited ten seconds too long to let go. His only regret, however, was that his lips were numb, as well. Not so great for kissing his bride, and kissing Pilar far exceeded any of the exotic temptations the Hub could offer.

He straightened his tunic and proceeded down the corridor. Staff could scrape Barton off the floor; these days, staff were always scraping his cousin off some foot-trod surface.

Another cheer, far off and muted so that the sound could also be a chorus of screams.

Hakan cursed his plan. What had he done bringing that sweet girl here? She was as delicate as she was beautiful. Her life on Sol had not exposed her to the kind of danger present in the Hub. He'd thought her name would protect her, a great family that could trace its line back to the first convoys from Earth. Her wealth, too, which could command anyone's respect. But the Hub was in the deepest black of space, where starlight was a distant glitter.

Nothing could protect her here.