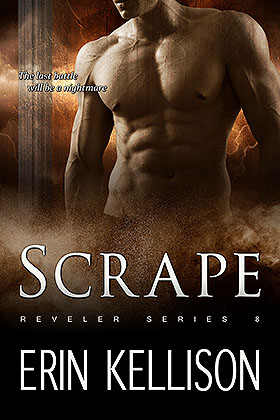 The last battle will be a nightmare...

The Sandman has broken through to the waking world, bringing with Him a monster of a storm. Mirren Lambert and Vince Blackman set out to force him back into his own realm, while Malcolm Rook and Jordan Lane are cornered by an old enemy intent on revenge. They learn that there are no rules when fighting for the ones you love.

In the midst of the chaos, Harlen Fawkes is charged with finding a way to make dreaming safe again. As nightmares lurk in the fringes, waiting to attack, he is driven to a bold decision that will change the world Darkside forever. All the while, his heart is with Sera—will the love of his life ever wake again?

Steve Coll must come to grips with his altered nature. His passion for Maisie Lane transcends the darkness, and he becomes both a fearsome nightmare and the hero humanity so desperately needs. Armed with hope and love, he strikes out to defeat a powerful god. But will it be enough? Or has dreaming just become too dangerous?

Scrape is the eighth and final installment in the Reveler serial, a hot paranormal romance set in a world where shared dreaming is a new pop culture phenomenon that allows people to indulge their wildest fantasies. But there are also unknown dangers Darkside; nightmares are slowly infiltrating not only dreams, but the waking world as well. And behind them all is a shadowy entity called the Sandman.

THE SOUTHERN CALIFORNIA WAKING world was a paradise of blue sky and drought-faded green foliage, but Harlen Fawkes burned as the sliding doors to St. Vincent’s Hospital parted ahead of him. Terror had superseded his reveler exhaustion so that he was made of something more elemental than mere blood and bone. Something that made his eyes crackle and his heart beat erratically.

Sera, who had just finally promised to be his.

The lines of the hospital walls and floors blurred as he strode through the lobby to find an elevator. He grappled with his inner demons as the too-slow metal box filled with people—a few glancing at him with concern in their eyes—and then lifted to the second floor where the intensive care unit was located.

You did this, the bitter voice in his head said. She’s not a soldier. Not trained. She’d already made her decision about reveling years ago. She’d decided it was too dangerous. But you pulled her back into it—proxying for chrissake!—and now look where she is.

The shame of it was swallowing him.

The doors parted at last, and he walked down the hall past a central bank of computer monitors. A nurse looked up from one of the screens, but he ignored her. He already knew he needed Room F. And the uniformed officer who was sitting outside the door—wearing Chimera colors—made it obvious which room that was. The door to Room F was just opening, a familiar silhouette stepping outside.

“Pop?” The hoarse rasp of Harlen’s voice was nearly inaudible.

His father’s beard was coming in, and he had circles under his eyes. The wrinkles on his face were cut deeper than usual. Recognition sharpened his dad’s gaze, and then relief broke over his expression. “Oh, thank God.”

Harlen felt himself suddenly wrapped in his dad’s strong, safe arms, and for a second, he felt like a child again.

“Is she okay?” Harlen’s throat was clogged with stones of fear. “She has to be okay.”

His father pulled back, tension straining his brow. “She’s had some complications, but she’s holding on. She’s tough. We just have to wait, see if she can pull through. How’s your ma?”

Complications? Harlen swung his gaze toward the door.

Ma. Harlen’s stomach tightened. He looked back at his father. “She’s being held…by them.” His father would know he meant the Oneiros. The ones who’d burned down their house. The ones who’d shot Sera.

The wrinkles on his father’s face seemed to crease still deeper.

Harlen lowered his voice and leaned forward slightly to speak in his father’s ear. “I sent someone in for her,” he said. “He got me out, and Rook and Jordan, too.” The Oneiros believed that Marshal Osbourne was one of them, so he could get by undetected. “I trust him.”

But if the Oneiros who’d infiltrated Chimera had been willing to perform an illegal memory retrieval on Jordan, then they wouldn’t hesitate to do the same to his mom, who also knew about Maze City.

“No, stop.” His father stepped back and shook his head. “Don’t tell me anything more. Someone, somehow, might be listening, and I don’t want to jeopardize her chances.”

“I’ll let you know as soon as I hear anything.”

“Be safe first. Your mom and I can both hold on if we know you’re safe.” His dad held up a hand toward the door. “Now, let’s go see our girl.”

Harlen used to be friendly with everyone, but since this marshal could easily be Oneiros, Harlen merely grunted in response to the man’s greeting.

Through the glass wall, a yellow curtain was drawn around a bed. He steeled himself for what he would find as he crossed the threshold into the room. His mind rebelled against the idea that she was here at all. He’d basically shot her himself.

“She got through the second surgery last night,” his dad said as he reached for the curtain and pulled it open. “They’re worried about blood clots, but if she can make it another twenty-four hours, her chances of recovery will increase dramatically.”

Harlen’s skin grew painfully tight as he looked at the bed. Sera lay on her back, face ashen, a white breathing tube lodged in her mouth. She had an IV taped to her arm and an oxygen clip on her finger. Machines blinked various stats, but he didn’t have to read them to know she was fighting for her life.

He wanted to crawl in bed with her and follow her down into whatever murky waters she roamed in her sleep, but all he could do was put his hand over hers and give it a warm, gentle squeeze.

It wasn’t supposed to be this way.

“Senator Fleight has a lot to answer for,” his dad said.

“I think she’s trying to own up to it,” Harlen said grudgingly. He couldn’t tell his father that Fleight had helped Osbourne break them out. The senator had come around too late for Sera, though.

“One of her people did this,” his dad said in a hard, angry tone.

Harlen shook his head, thinking that his family, Sera included, shouldn’t have been involved in the first place. That was on him.

“Did you know—” he began, but his throat choked him into silence.

His dad put a hand on his shoulder, but Harlen couldn’t accept the comfort.

He tried again. “Do you know how Sera and I got back together?” He didn’t wait for an answer. “Some sicko had been stalking her in her dreams for months. She was so exhausted from fending him off that she fell through the front window of her restaurant. That’s what it took—falling through a window—for her to finally call me and ask for help.”

His dad chuckled. “She’s a fighter, all right. Stubborn as hell.”

“No.” Harlen shook his head. Dammit. “I mean, yes, she is, but that’s not what I mean. I meant that she hates the world Darkside that much. And look where getting involved with me got her.”

“You think she’d have been better off with her stalker?”

His dad closed his eyes and took a long, deep breath, just as he used to do when Harlen had been growing up and had gotten into trouble for something stupid. And there’d been a lot of stupid in high school.

When his dad opened his eyes, Harlen braced himself. He deserved whatever he got.

“You look exhausted”—his dad was using the Stern Tone—“and you’ve been battling nightmares, literal nightmares, so I’m going to cut you some slack and invite you, again, to look at Sera, your fiancée, and, God willing, future mother of your children.”

Harlen did so, cold sweat suddenly slicking over his skin.

“Do you see a weak woman requiring your protection?” his dad asked.

Harlen almost laughed as his eyes teared. He was a grown man, head of the Darkside Division, and his dad was lecturing him. But yeah, okay, he understood. Sera wasn’t a weak woman, not even lying there on a ventilator. Weak didn’t apply to her.

“Her injuries are not about you,” his dad continued. “They have nothing to do with you. They are proof of her courage. She hates the world Darkside? So do I. And yet she recognized a need and she met it. If you’re very lucky, one day she will bear you a child. And after she endures hours of labor, will you steal her thunder by telling everyone you regret putting her through it?”

“No, sir.” Steal her thunder? Sera would slice and dice him. No one could make her do anything. She was her own boss. Tougher than anyone. Smarter, too. “She’s a soldier.”

“Goddamn right she is.”

“As she reminds me every day.”

“Sera will pull through,” Harlen said, looking at the plastic tube taped into her mouth, the machine hooked up to it giving her air. The panic inside him hardened into determination. He was so tired, but if she was still fighting, then he had to fight, as well. And he would. He was the trained soldier, but she was showing him how it was done.

“I have to go,” he told his dad. “Get back to work.” He couldn’t enter Chimera HQ in the waking world without being arrested or shot. He’d have to go Darkside again. Secure the Agora from the inside.

“I know you do. I’ll stay with Sera. I’ll be here until you can be.” His dad’s eyes were getting darker. “How bad is it really?”

Very bad. Too many fronts to fight.

“That big storm out east?” Jordan and Rook had gone to investigate… “That’s the Sandman in the waking world.”

His dad frowned deeply. He shook his head and shrugged. “I don’t know what that means.”