Until Dawn A Dragons of Bloodfire World Novella 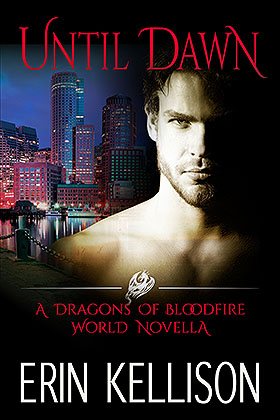 A witch reality television show, a deadly curse, and a vampire on a mission—a perfect brew for love.

During the live end-of-season Tell All episode of the reality television show, Witching Wild, cast member Judith Kress opens fan mail expecting the usual personal questions, but gets cursed instead. Vampire Calvin Blake is charged with saving her life and discovering the source of the curse, but ends up in deeper trouble than he thought possible. Survival is going to be a dangerous affair until dawn.

** Until Dawn was previously published in the Taming the Vampire boxed set. **

Excerpt from Until Dawn

Restlessness was like the perfectly knotted tie around Calvin Blake's neck, strangling him constantly. How convenient that he, as a vampire, could not die. Not that way. Instead, he would stand ready to serve yet another long night. And tomorrow, and then another, and another, each one an exercise in patience.

"It's coming back on!" Bloodkin Lady Fane said of her favorite show, Witching Wild—reality television at its best.

Among his duties to the beautiful and mad dragon: watching her shows with her.

"Yes, my lady," he said as the glittering intro flashed through promotional images of its three pretty stars and then settled on the plastic white smile of Tommy Bynes, the host of the live end-of-season Tell-All.

"Hateful man," Lady Fane muttered at the screen. "Surely they could get someone better."

Restlessness, however, was better than the abject thirst that could darken his mind with a need to hunt and feed, which is why he chose to remain in Lady Fane's service. Just thinking about blood parched his mouth and made her large sitting room waver around him. That was the trade—Fane's dragon blood to sustain him, or life as a spider, a parasite lurking in dark corners.

On the television screen, Judith, one of the three cast members of Witching Wild, offered the host a vial of blue fluid.

"You want me to drink that?" The host looked aghast at the three women.

They were all in their mid-twenties, primped and polished to their glossy best. The huge television screen made them appear life-size, as if they were actually seated in Lady Fane's sitting room.

The dramas of humankind were Lady Fane's guilty pleasure, not that a dragon ever felt guilty about anything. Though Calvin was far from the show's viewer demographic, he rather enjoyed the three young witches' antics as they navigated life, love, and magic.

Judith, typecast as "the good witch," sat on the Tell-All host's left, her thick brown curls ironed into a slick, dark taffy too hard for her easy warmth of personality. On the host's right were Serena, a blonde with icy, intelligent eyes, and Meg, a voluptuous redhead who looked the part of a vixen, though she seemed more turned on by books than the men who tried to get her attention. Contrasting temperaments notwithstanding, the women were a united front.

"They're getting him back," Lady Fane said with a gleeful little clap from where she lounged on her divan, an eight-hundred-year-old dragon shifter perhaps too entertained by the three witches' lives. But Lady Fane didn't get out much these days.

Therefore, neither did Calvin. He loosened his tie slightly, but it didn't help the feeling of constriction.

"Yes, my lady." He stood behind her, ready to do her bidding. Her human servants, more fragile than he, kept their distance as their lady's mind had slowly lost its purchase on the world over the years, her moods vacillating erratically as the dragon within her vied for control.

Following her shows wasn't difficult work, especially Witching Wild, although there had been that one time Lady Fane had unknowingly crushed the bones of his hand in her excitement. He flexed and fisted it at the memory.

On the television, Judith jiggled the vial at the show's host. "Prepared it myself."

It was well known by viewers that anything brewed by her hand—while occasionally having some magical properties—rarely had its intended effect. But at least it was magic. Serena and Meg acted witchy for the cameras, chanting and whatnot, but so far they had no demonstrable ability. Most likely they were humans acting as if they did. True witches, Judith being the rare exception, kept their identities, bloodlines, and craft secret.

"It's for clarity of mind." Serena's blue eyes glinted as if daring the host to refuse.

Some months ago, during the midseason Tell-All, he had badgered Judith about her break up with a club owner who had apparently only shown interest in her to get free publicity. The host had been trying to provoke an emotional reaction from Judith, and he'd gotten one—a verbal skewering from Meg and Serena.

The host made the mistake of taking the vial. "I'll save it for later."

But Meg wasn't having it. "You put that in your pocket, and I'll hex you."

In spite of his restless mood, Calvin felt himself smiling as he watched. Meg couldn't hex at all, but he was certain she could conjure something painful, if only with her sharp words. Bookish people had arsenals at their disposal.

The host flushed, his orange tan deepening to umber as his gaze trained beyond the scope of the Tell-All set, as if for assurance or direction. He must not have received the answer he'd wanted because he made a grimace of his Hollywood smile. His white teeth sparkled.

"Bottoms up." He twisted out the cork and puckered up.

Ratings up, too, no doubt.

"Serves him right." Lady Fane cackled, a low, ominous sound that made Calvin wonder if her human or dragon mind prevailed today. He could relate to the struggle. Distractions like Witching Wild were necessary to remain sane.

While the host valiantly tried to keep whatever had been in the bottle down, a mailbag was delivered via a smoky, theatrical poof! to a table in the middle of the set. The bag artfully spilled onto the table, and the host selected a few letters and passed them out to the cast members. It was the final segment where the witches took questions from the fans.

"My favorite part," Judith said as she gave a friendly smile to the camera. She ran a finger under the envelope's flap to break the seal. A small flash of blue, like static electricity, was just fading as she pulled her finger back, a thin line of blood visible as the camera went in for a close-up.

"Paper cut," Judith said, laughing and holding up her finger.

Calvin frowned. A paper cut, yes...but something else, too, with that blue lightning.

Anyone with an eye for magic had seen it.

Lady Fane crawled off her divan on all fours—sometimes she forgot what form she was in—and clambered over the low table in front of her. She approached the screen where she sniffed, growled, and sniffed again. But televisions still weren't able to transmit smell, not even if a dragon shifter demanded it.

"Surely there's a spell or incantation you can do to heal it," the host said to Judith. It came out as a spiteful challenge.

"Oh, yes." Judith held her finger up and closed her eyes as if to channel her magic. "Will the powers that be...please bring me a bandage?"

Serena reached across the table, grabbed the envelope from Judith's lap, and pulled out the letter. Her expression was unreadable as she handed it to Meg, whose gaze went hard.

The camera cut to a mesmerizing ruby red trickle that traveled from Judith's paper cut to her palm.

Blood and magic were a dangerous combination for anyone.

Meg got up—and in the host's way on live television—and took Judith under the arm. "Let's get you cleaned up."

"Yes, my lady." The blue lightning had signaled the casting of a spell, and the letter had drawn blood, which had surely been its intention. Blood was the most potent form of magic there was.

Judith had been trying to learn her craft on the show; she seemed to know next to nothing about how to channel her natural abilities. Her family should've taught her, but it seemed they hadn't. Very unusual. Regardless, her efforts had no doubt attracted the attention of parties antagonistic to either magic or her use of it in public. She'd been lucky no one had struck out at her before this.

"Mine, too, my lady." Anyone following the witches over their second season would know Judith was not a threat. And there had been that one time when she'd saved a child from being hit by a car. It was still in all the promos. What a damned shame.

The Tell-All cut to a montage of the dramatic high points of the season—Judith coaxing a flame from a candle without a match, Serena identifying a betrayal in the fashion design offices where she worked, and Meg flirting with a handsome author at a social event she'd helped plan.

"Let them know I won't tolerate it," Lady Fane said.

Calvin stared at her for a moment, surprised. Lately, his lady had been making many odd requests, but this was more unusual than the others. She wanted him to interfere with the television show?

Never mind. His lot was not to question but to carry out her orders. And for that young woman, Judith, just coming into her magic, he was glad to do it.

"Yes, my lady." He set about to somehow contact the producers who had to have selected that specific letter for Judith to open—they wouldn't leave any segment to chance. Whatever their plan, they would bow to the whims of Bloodkin Lady Evangeline Fane. Eight hundred years on Earth had given her that kind of influence, though as far as he knew, she'd never wielded it to save a witch.

Calvin held on to his lady's mobile telephone as she'd smashed, pierced, and pulverized several others in frustration in the past. For a moment, he considered whom to contact. On her behalf, he occasionally touched base with studio execs to obtain movies before their release...but, no... He settled on Mr. Randolph, his lady's personal contact within the Bloodkin Assembly, which was the organization that managed dragon shifter interactions among their own kind and with the public when they required anonymity.

Mr. Randolph answered on the first ring. "How may I serve?"

While he was in the middle of relaying Lady Fane's orders, she spoke again. "You should go, Cal."

A pang of concern for the humans in her service made him hesitate. Then he set his reservations aside. They knew to whom and what they'd pledged to serve.

For the first time in a long time, the choking sensation eased, and he drew a deep, clear breath. The task was a welcome change of rhythm.

"I'll get back to you," he said to Randolph and ended the call.

"Find out who did it," she said. "And make sure it doesn't happen again."